The hymns on this album were approached differently from the first unadorned album. First of all, when I first began recording the first album, I didn’t even know they would later become an album. I was recording them as a first fruits gift to God and didn’t know yet what I would be doing with them.

When I had time to listen to the first album, I realized just how soothing and pensive it was. It was not my intention to create a meditative experience. But when I realized that this was precisely what I had done, I then approached the recording of the next album in a more meditative way.

As a result, I deliberately chose to keep the tempi on the slower side of the norm and to extend my phrasing to longer passages. It was something that felt right from the onset. Thus, the new album actually is meditative as a whole.

Recording trumpet tracks has become a big part of my daily work schedule. I record demos of my compositions. I record examples for my students to study and listen to. And now I record music for my YouTube videos. Before I record a track for one of those projects, I record a hymn. Lately I’ve been including video, which you can watch if you click HERE. The recording usually takes about fifteen minutes to complete. Then I move on to my other work.

Life as a professional, freelance musician is a roller-coaster ride. The ups and downs are often severe. And yet, there is something about the hymns that works as a stabilizer to fend off some of the extreme peaks and valleys. That’s what I have learned as a result of publishing this, which is actually my third unadorned hymn album.

So, yes, I have been doing these first fruits recordings for a few years now. And I’m going to share with you a little secret. I am listening to Unadorned Trumpet Hymns II now, as I write this. And I have listened to the other unadorned albums many times over. Why is this a little secret? Because most musicians do NOT listen to their own albums.

But these unadorned hymns are different. They have a calming affect when you listen to them. Okay, maybe calming is the wrong word. I used the word “stabilizing” earlier. Calming, stabilizing, grounding, soothing, satisfying, these are the words I think of when I describe how listening to these hymns makes me feel.

Maybe I feel this way because this is music from my culture, a culture that has lately turned its back on this music for the sake of being relevant. Maybe… So maybe you won’t feel the way I do when I listen to these tracks. If you never grew up with hymns the way I did, then maybe the music will not have the same effect on you as it does to me. I can’t know that.

It breaks my heart that our churches today don’t sing hymns anymore. I have heard numerous justifications for it, but none of them stand up to biblical scrutiny. When hymns are sung in church today, they won’t sing them without adding a rock beat. 🙁

Well, this album is, in part, my way of saying that I prefer singing the hymns over bringing the world’s music into our worship time.

You know, Pearl and I went to a church not long ago that did something I felt offers a wonderful compromise to the whole hymns vs. worldly music issue. The service started off with rock music for the prelude. They did about fifteen minutes of praise and worship songs BEFORE the service began. But during the service, they only sang traditional hymns. Then they went back to rock music for a postlude. What a wonderful idea!!!

Anyway, I didn’t mean for this to become a rant. This is just something I feel very strongly about. These hymns are an important part of the Christian church. THIS is Christian music, not world music. The reason I shared my feelings about where the church is today, in regards to music, is because these unadorned trumpet hymns represent my effort to conserve the music of the church and push back against the rock beat stuff that has penetrated almost every Protestant denomination.

You know, when I first published the original Unadorned Trumpet Hymns album, I just assumed it would be the least listened to album that I’ve published. I was VERY wrong about that. It is by far the most listened to album, with thousands of streams per week on spotify alone. Here is an map showing where my hymn recordings have been streamed over a period of three months: 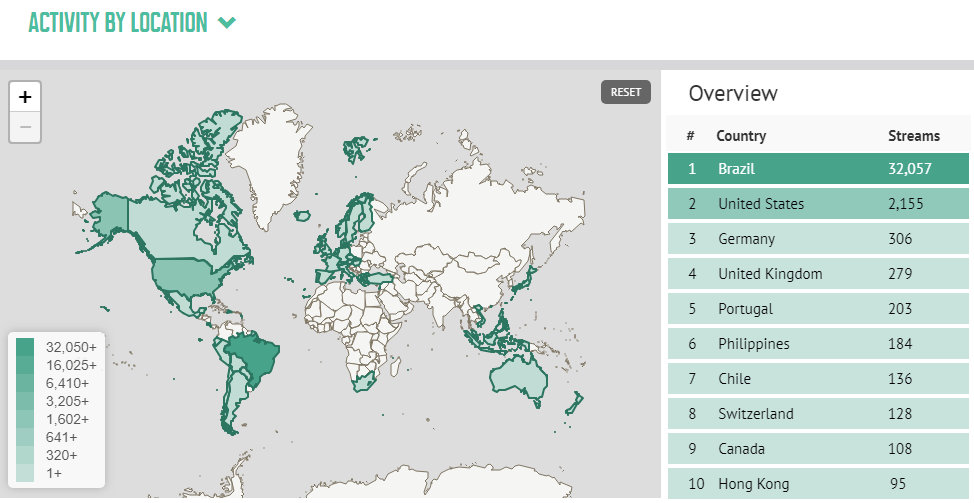 I don’t know any non-famous musicians who have stats that come anywhere close to this. So there are obviously at least some people who still like hymns. And I am pleased to know that they are enjoying my recordings. Praise God!