Eddie Lewis has recorded a number of albums himself. What is amazing is that some of these albums are streaming around the world. Eddie is not a famous trumpet player, but people like his music and they listen to it around the world.

The following image shows a map of just three months of streams on Spotify. Eddie’s music has been streaming like this, consistently, since 2016. These are great stats for a trumpet player who isn’t famous. 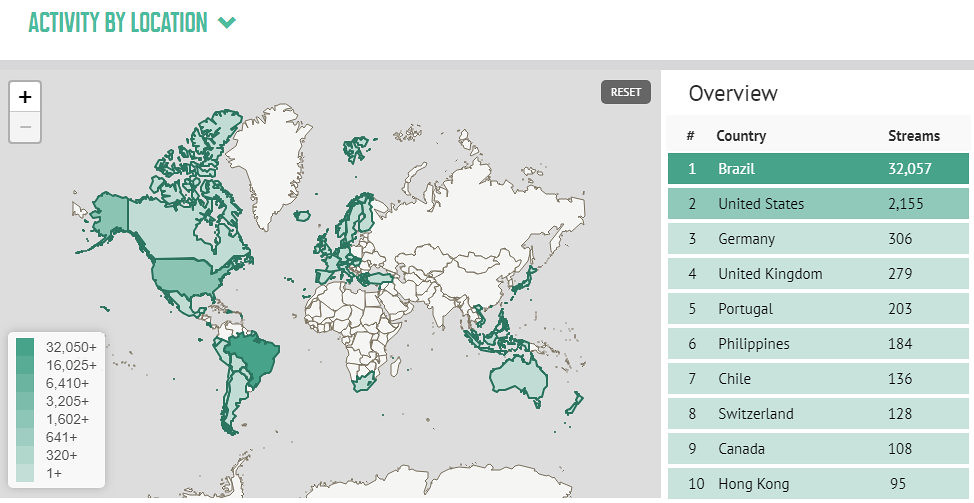 Eddie has been active as a studio trumpet player, making hundreds of recordings since the early 1980’s. He has recorded dozens of albums for many different bands. He even recorded an album that won a Grammy in the Tejano category (Little Joe’s Chicanismo). But most of those albums do not feature Eddie. Which is not a problem. He’s not the kind of person that needs to be the center of attention.

But as Eddie matured as a musician, and as a trumpet player, he began making his own kind of trumpet albums. These started off as demo recordings for his compositions, but they eventually grew in popularity and became recognized as albums in their own rights.

Eddie began his trumpet performance career in El Paso, lived for short stints in Chicago and Pittsburgh, then moved to Houston where he has lived since 1988. All of these recordings of Eddie Lewis are from his time in Houston. He did make some professional recordings in El Paso, but we don’t have information about those recordings.

Eddie has other recordings, besides what are on his albums, posted in various formats on YouTube. Many of these show Eddie playing his trumpet live.

One thing worth noting is that Eddie is most well known as a jazz trumpet player. So you may be surprised to see that most of Eddie’s albums are not jazz recordings. There’s a reason for this. Eddie doesn’t believe in playing jazz with tracks. He will do it when he has to, or if someone makes a request for it (like someone did when he recorded Giant Steps). But for the most part, he will only record jazz with live human beings.

We do have a separate area of this website dedicated to Eddie’s trumpet albums. The difference between that area of the website and this page is that the album page goes into deeper details about the albums. This page is meant as mostly a listening page for you to browse the different albums in one spot.