The Importance of Resting – Trumpet Chops

You are here: Home / Trumpet Lessons in Houston / Old Articles / The Importance of Resting – Trumpet Chops

The following article is a combination of two short articles I originally wrote for my newsletter, back in the late 1990’s. The first article addresses the importance of rest and how to recognize if you are over practicing. The second article gives you ideas about how to incorporate rest into your trumpet practice.

I’m overwhelmed by how many trumpet players don’t rest enough when they practice. Many of them don’t realize that constant playing could damage their lips so severely that they may never be able to play again. This is what people mean when they say, “He lost his lip”.

One of the problems with practicing too much is that it feels very different from running too much, lifting too much or doing too much of anything physical in nature. Our lips don’t feel like our legs do when we’ve been exercising them too long. In fact, from my experience, the only way to really know if you’ve been practicing too long is by listening to the sound.

Here are some symptoms to watch out for that may mean that you don’t rest enough when you practice:

It took me about two years to get used to resting enough. I was one of those who didn’t like to remove the horn from my lips between exercises. I used to practice two and three hours straight like that. When I began resting, I felt like I was loosing control. That constant pounding away at exercises and etudes had become a crutch for me and loosing that crutch was like quitting caffeine.

But I got over it and I learned that there are other benefits to resting that don’t manifest themselves physically as much as they do emotionally. Practicing used to feel like drowning to me. I felt as if every practice session was an act of desperation in much the same way as someone drowning gasps for air. It felt like a constant struggle to stay above water.

Now that I rest “enough”, my approach to the instrument is never desperate. I’m calm and clear headed, which means that I’m making better decisions and getting more done with my time.

So please……follow my advice and don’t over do it. You have more to loose than you might think…….and even more to gain.

As I write to you, my eyes are drooping, my head is pounding and my feet hurt while I try to recover from this long, hard weekend. At first it seems as if I have nothing to write about, since all I can think about is resting. But that’s something isn’t it?

When I was studying with *Dick Schaffer, he had mentioned that he was taking a few days off from the horn. When I asked him to explain it to me a little more, he told me what his schedule was which lead up to that moment. I forget the exact details, but I remember it was a three week run, starting with a Mahler symphony. That was the first of three very big weeks for the symphony which not only included Petrushka and Bartok’s Concerto for Orchestra, but also an all Copland concert on a Thursday night. And if that wasn’t enough work, they were also doing some pit work for the Houston Grand Opera at the time, on their nights off. After that three week run, he said he had to have that time off from the instrument.

Of course, there’s always the physical reasons. The muscles in the lips need rest or they won’t develop. But I really believe there’s more to it than just the physical stuff.

I’ve known people who “go at it”, working long, hard hours every day of the week. After years of doing this and not allowing themselves the rest that they need, they seem to be able to handle it. But looks can be deceiving.

I remember when I was waiting in line at Kentucky Fried Chicken and was impressed with how hard the lady was working behind the counter. But later I realized that the lines weren’t moving at all. So I watched this lady to see why. She was indeed very busy, constantly moving, but at least ninety percent of that was wasted effort. I saw her walk the entire length of the kitchen three times for things that she should have gotten on one trip. And that was only one example of many. All of that movement was actually only superficial.

Then there are the people who would loose their heads if they weren’t attached to their shoulders. These people look as if they can handle going without rest but if you watch them, you’ll realize that they are only half there. Their minds have decided that, if they’re not going to get some rest, then they’ll get the rest that they need, right now, anyway.

How is it that I can recognize this?

Because I used to be the exact same way. When I was at UTEP, there were times when I would climb the stairs and people would say hello to me, and I wouldn’t realize it until several minutes later, after I had already gotten to the top floor. Back then, I thought I was just a flake. But that wasn’t it. I was running myself ragged. And what did I gain from that?

So I leave you with that thought, as I head back to bed. It’s okay to push yourselves, but always save time to recover.

It is possible to do everything that The Physical Trumpet Pyramid suggests and still not progress. I see it with my students all the time. People even email me about it. They do all the exercises for all the right reasons and they still don’t progress. Usually this means that they are not resting enough.

To help my students to rest enough, I teach the three levels of rest.

This level effects the circulation of blood through the lips. For every beat that you play, whether it’s an exercise, an entire etude or a phrase that you’ve focused on, you should rest the same number of beats before you begin to play again. This means take the mouthpiece off of your lips.

Playing for long amounts of time can be extremely damaging to the lips. In severe cases, it can involve permanent numbness. I use a tourniquet to explain this to my students. When do you apply a tourniquet to a persons limb? When there is severe bleeding or if the person has a venomous bite. In both cases, the tourniquet is used to stop the blood circulation to that limb. One thing they tell you in first aid is to not use a tourniquet for longer than two hours. Otherwise, that limb will begin to die. The oxygen that the cells in that limb need to survive is being denied them. The same is true when you play too long without taking the trumpet off of the lips.

Resting at the day level is important for other reasons than those mentioned above. I learned about this level of rest from my brothers when I started “working out”. They already knew about all of this stuff from being in sports in school. I decided, since lips are muscles and I’m trying to develop those muscles, then I would learn a lot about trumpet playing if I learned more about muscles.

One of the first things I learned from them was that you never work the same part of your body two days in a row. In order for muscles to grow, you must first “work them out” and then let them rest. This rest allows them to recover. When they recover, they come back stronger than they were before the workout. Without the rest, you will be continually “tearing the muscle fibers down” and never letting them recover.

So what does this mean to us trumpet players, that we should only practice every other day? No. You could but it’s not necessary in most cases. Think about it this way. Let’s say a weight lifter works his or her lower body on Monday. Does that mean that he can’t walk on Tuesday? Of course not. To a body builder, casual walking probably doesn’t seem like a physical activity.

Wouldn’t the same be true for trumpet players. To apply this concept to trumpet playing, I do what I call “alternating days of difficulty”. I use a three day rotating system. I start off on Monday with a medium day. On this day, I limit my practice time to one and a half hours. I also limit my range to the E or G above high C. This means I don’t practice anything on Monday that goes above that. Tuesday is my big day.

On Tuesday, I try to get as many hours of practice in as I can and I don’t limit my range. In fact, I try to include my entire current range in all that I do for that day. If I’m practicing scales, I make them span the entire distance between low F Sharp and double C.

On Wednesday, I limit my practice time to forty five minuets. I also limit my range to high C. After a very long day of practicing double C’s on Tuesday, forty five minuets of a limited range feels like I’m not even getting warmed up. It’s essentially a day off even though I’m still practicing.

Some of Eddie Lewis’ trumpet books are designed to help you rest the right amount. 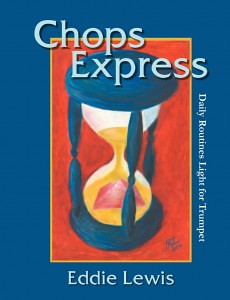 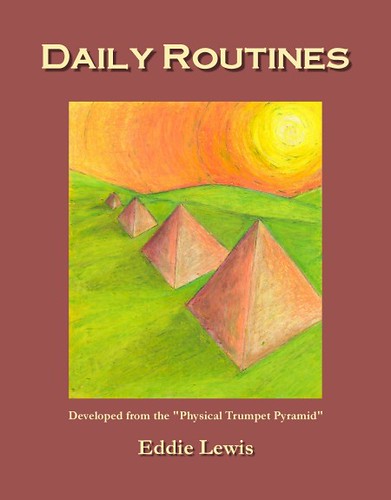 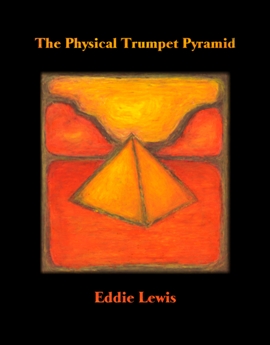 Perhaps you’ve read this entire page, you know what needs to be done, but you need a little help putting it into practice?

No problem! We have a variety of ways that we can help. The best help you can get is to sign up for private lessons with Mr. Lewis, but not everyone can afford to do that. Another alternative is to purchase his books. But we have other options as well. Feel free to explore this website to read more about how Eddie Lewis can help you incorporate this resting strategy into personal practice time.